A useful technology that almost no one in traffic is using

My hope in this article is to shine light on a technology that I think provides a ton of value but which is very underutilized in this industry.  Let me start by saying I’m not an expert in this technology but I’ve been using it off and on for almost 10 years with good success.  The technology I’m referring to is low cost fixed wireless radios, typically operating in the 5GHz band.  I will be looking at how this technology works as well as how it’s being used, both by end users directly as well as by Wireless Internet Service Providers (WISPs) to provide connectivity as a service. Fixed wireless radios offer a unique connectivity option as it allows for unlimited bandwidth which LTE cannot provide.  In cases where high bandwidth is required (ex. video streaming 24/7) there are not very many options.

Over the past decade wireless networking has been revolutionized by companies like Ubiquiti Networks who have offered very high-performance radios for extremely affordable prices (some radios under $100).  The biggest surprise is that no one seems to know about these devices, especially in traffic.

There are certainly other low-cost radio providers but I will focus on Ubiquiti Networks in this article as they seem to be the leader in this space and I have the most experience with their devices (others include Cambium, Miktrotik, TPLink, & Netgear).  Ubiquiti has experienced a monumental rise in market share and valuation since going public in 2011, going from $17 per share to almost $300 in that time.  I started using their radios in 2013 and I just wish I had bought some stock back then. 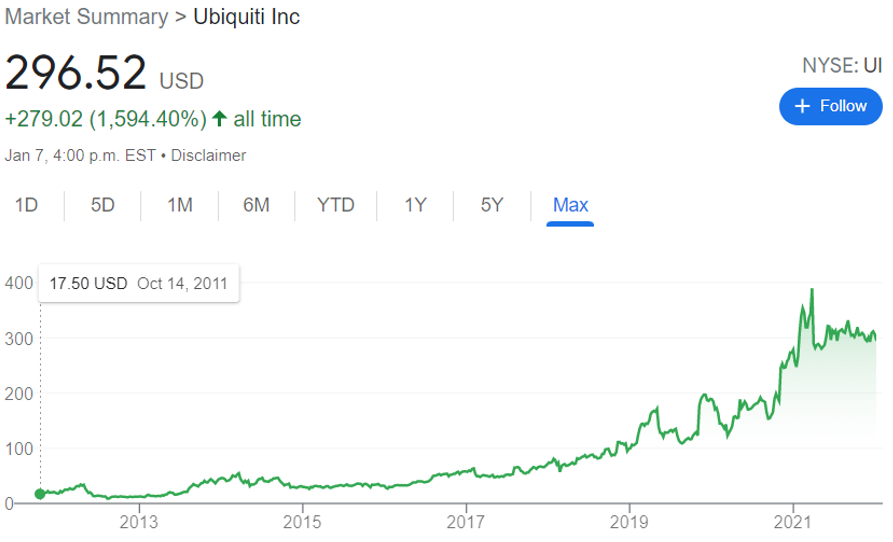 Ubiquiti has expanded its product offering into many other verticals including security cameras, wired networking, indoor WiFi, and many others but I will stick to focusing on wireless networking as that’s their original core product, and the primary one I use.

Disclaimer: I still do not own Ubiquiti stock, and while we will use their equipment as a component in our projects, we do not sell the radios as a stand-alone item.  They are widely available on Amazon and elsewhere if you want them.

The distinction I make in the title of this article is meant to compare networks deployed privately for ones own network (DIY) against networks deployed by companies as a service (WISPs).  WISPs essentially deploy and maintain the network for you, if you’re not tech savvy enough to deploy a network you can still take advantage of this tech by working with a WISP.

The reason I bring up Wireless Internet Service Providers (WISPs) is that they are by far the largest users of Ubiquiti equipment, once you know what these radios look like you will start seeing them everywhere.  WISPs deploy these networks for the primary purpose of providing internet access to their clients whether those are residential, commercial, or industrial clients.  While primarily focused on internet access, WISPs are also able to provide secure remote access to your devices through the use of VPNs and other means, shielded from the open internet.

On the other hand, there are many clients (cities in particular) that would benefit from deploying this equipment themselves. Cities can do this to locally interconnect their traffic signals, offices, and other roadside infrastructure while never having to connect to the internet directly.  This is the category I’m calling DIY.

• DIY – Creating local wireless networks yourself, between devices on the roadway (often with a network connection at the access point for backhaul). These are typically last mile type small networks with 2-10 devices.

• WISPs – Relying on third party ISP firms to deploy and maintain a network in order to provide internet connectivity to your field devices (with unlimited bandwidth, unlike LTE).

Depending on your application and skill level both methods have their advantages; however, using a WISP is by far the simplest.

Wireless network solutions typically fall into one of the two categories below:

• Point to Multi-Point Networks (PTMP) – Multiple medium to short distance links back to a single outdoor access point utilizing primarily the 5GHz band at distances up to 25km.

These two network types are often used in conjunction by WISPs where: (1) network towers have an access point radio for local client connections and then [PTMP], (2) a large backhaul radio to pipe that data back onto the main network [PTP].  Cellular networks use this same concept of operations but just utilizing different frequencies and radio types. 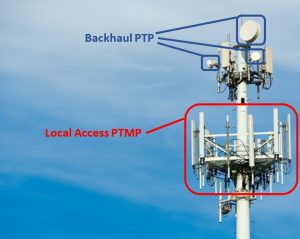 Cell towers look like a complicated mess but once you understand antenna types you can dissect them pretty quickly.

If you look at a cell tower closely you can see they are made up of backhaul PTP radios (Dish/dome antennas) and Local access PTMP radios (Sector Panel antennas).  An example of this is shown here:

When I started writing this section it quickly reached 2 pages in length and realized this knowledge is going to be hard to impart in a short article.  Instead, I’ve decided to speak about the very general design concepts,  and if you want to discuss this further please feel free to contact me or google the topic(Article).  Ubiquiti also has a number of great resources for designing, see https://design.ui.com/ & https://link.ui.com/.

These are some design concepts to keep in mind when planning your network:

• Line of sight is critical – With these kinds of radios you need near line of sight for it to work in any reasonable way and at any distance beyond a few hundred meters, don’t try to go through buildings or large groups of trees.

• Line of sight is not like a laser – The Fresnel zone is an important concept, it refers to the area around the visual line of sight where the radio waves interact. This area must be free from obstruction for best performance, so don’t assume that a 1m clearance over an obstacle will work fine.  Typically 60% of the Fresnel zone needs to be clear of obstructions for good signal.

• Roads offer good line of sight corridors – I have deployed a number of systems along roadways and they offer good conditions for line of sight. I would suggest small networks of 3-6 signals on a single access point.  This is a great way to share a network connection with nearby offline intersections.  Do not try to go further than 600m down a road, it’s possible but starts to get tricky.

• Paper Survey then Real Survey – planning is very important, map out your deployments with google earth and use the elevation profile tool to make sure the radios will be able to see each other. Once planned out on paper you need to take real equipment out and test the connections with a wireless survey.

There are a wide number of applications for fixed wireless radios, but I am going to limit my recommendations to the use cases where it makes more sense than alternatives like LTE.  In our upcoming webinar I will provide details on actual systems we’ve deployed or been involved with.

Often municipal fibre networks are installed/deployed on a corridor basis which doesn’t allow for small jogs to provide connectivity to adjacent cross street intersections. Fixed wireless equipment like this provides a very easy solution to share network access to nearby intersections.

For example:  If you have fibre running down a major East West corridor you could place radios at each major crossroad pointing north and/or south.  Doing this could capture at least 1 or more adjacent intersections on those side streets and provide them network access.  Below is an example of how this might look, each radio link shown is no farther than 300m and would be able to capture adjacent intersections. 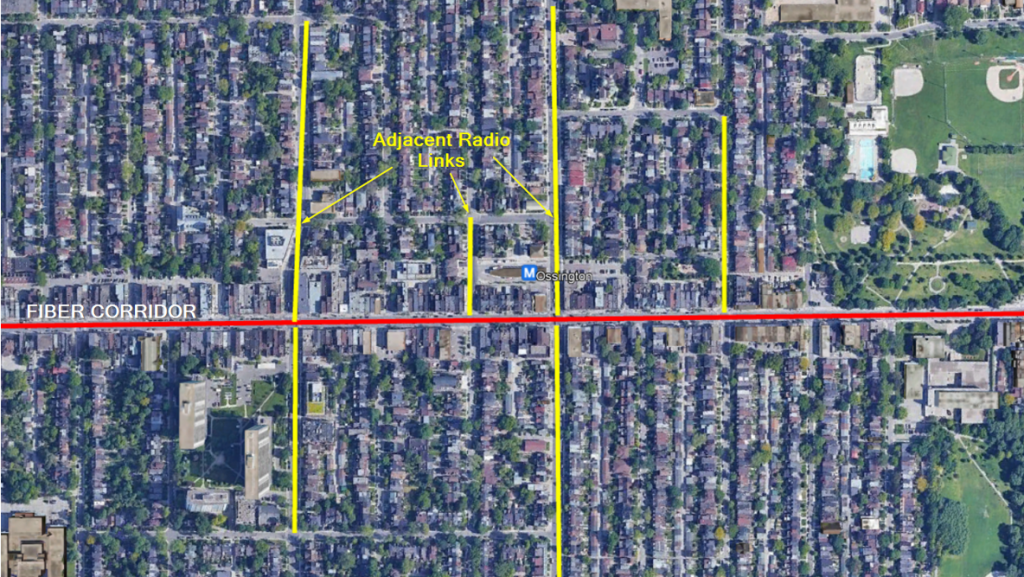 This application uses highways for radio network corridors. Due to their width and the available tall poles, highways typically offer excellent conditions for extremely long distance and high-quality links.

• Last Mile – Agencies usually run fiber down the length of a highway and have regular control cabinets installed for connectivity & power access. However, these fibre lines are sometimes only on one side of the road, therefore if you need a device to be installed on the opposite side, getting connectivity can be a challenge.  A simple point to point radio link could provide this connectivity quite easily.  There are also cases where a device needs to be installed in between far apart network cabinets where getting connectivity can be a challenge.  This is another case where a small point to point link could save a lot of expense.

Note:  In both these cases you would require power at your end point to run the radio and desired equipment.  In cases where you have power but not network connections these are great solutions.

• Long Distance Links – Temp and Perm – There have been several projects we’ve been involved with where network connectivity at a highway cabinet was needed to be shared with a device either upstream/downstream on the highway or adjacent to the highway. Usually in order to connect remote cameras onto the network.

For example: We worked on a project where highway camera poles needed connectivity, but the fibre network would not be run for another few years.  As such, we deployed a point to multi-point network in order to share fibre connectivity from 1 camera pole to 4 remote camera poles across a distance of 10km. 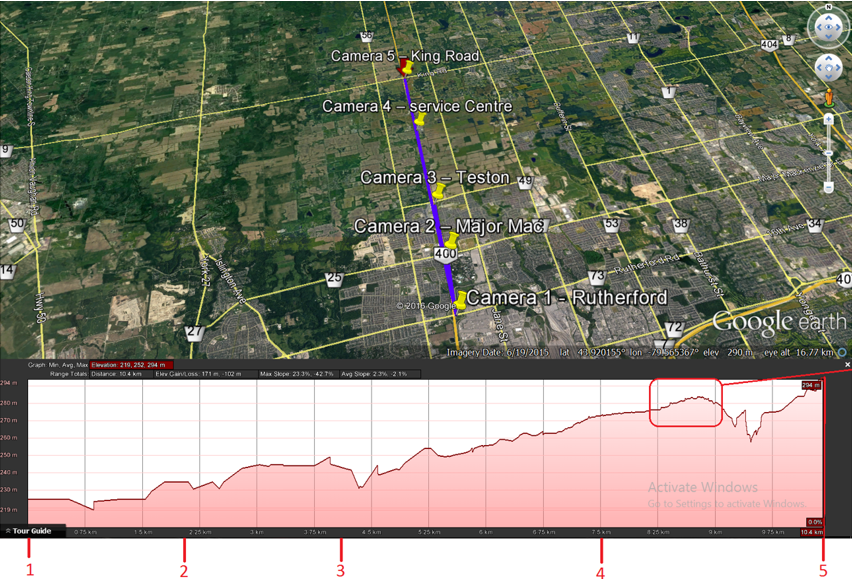 Both of the above scenarios can be solved with a WISP approach but would not be very economical since they are fairly simple networks and not prone to major maintenance issues.  The one exception is the long-distance highway link, that is more complex so a WISP would have been a good option there too.

The times when I’ve used a WISP for connectivity are typically cases where connections are required across a wide area and deploying my own network would be challenging.

For example:  Returning to the first example scenario where a fibre corridor was being shared,  consider a case where fibre was not available but you needed network connectivity across various intersections on a corridor or in a large area.  Building out a wireless network that spanned tens of KMs in an urban environment would not be an easy task or feasible.  However, by using a WISP, you could get a wireless connection installed at each intersectionIn fact, same adjacent network sharing approach could still be used.  As a reference, a WISP wireless connection will cost in the range of $100-150/month for a 5-10mb/s connection with unlimited bandwidth.

Whether you’re doing it yourself or opting for a WISP, fixed wireless networks are a simple to deploy and extremely affordable option for connectivity.  This technology is not widely used in the traffic industry and it seems to be due to lack of awareness more than anything.  I hope this article sheds some light on what it can do and why it’s a good option for certain applications.  I have seen City of Toronto and Region of Durham using these radios before (again just driving around, recognizing stuff on traffic poles) so kudos to them.  If you’ve enjoyed this topic and would like to learn more, I will be hosting a webinar on March 2nd at 1pm to talk about it in more detail.  I hope to see you there! 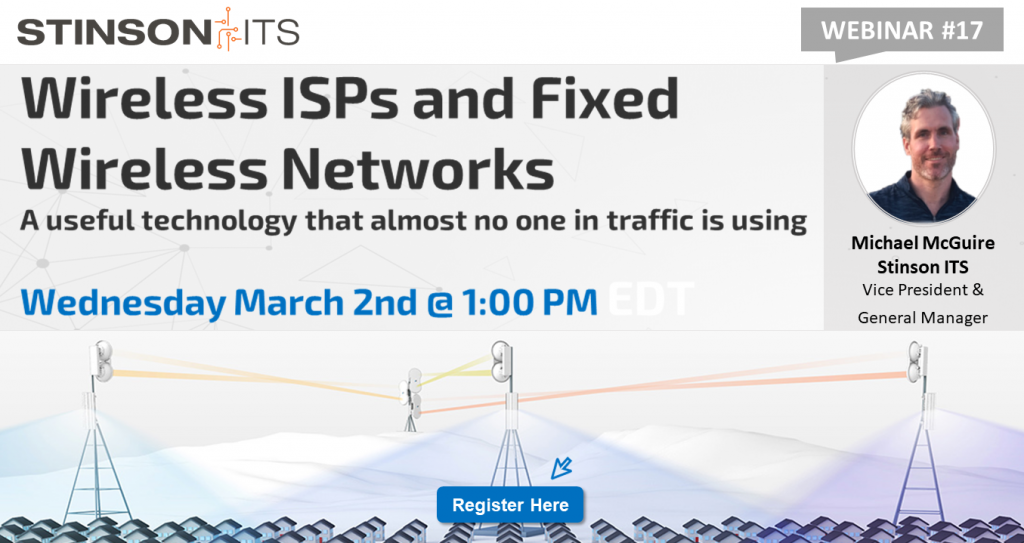 This entry was posted on 14 February 2022 under Uncategorized