After 9 years in the traffic industry one trend has always stood out starkly to me is:  Innovation moves at an absolute snail’s pace here.  As a technology nerd this has always been an incredible frustration to me and I’m certainly trying my best to change things.  I focus on technology because that’s my specialty, but it goes well beyond that.  Even basic processes and practices seem to lag the private sector by nearly 20 years and it’s really bizarre to me.  However, I do see things changing, and it seems to be driven by automated vehicles and the efficiency potential of a “smart” city.

In the last few years, we’ve seen major investment and interest in our industry from some of the largest corporations in the world.  Whether it be technology firms, telecoms, or automakers, influential companies are taking a sudden interest in traffic and transportation.  They must see the potential return on investment and they seem to be vying to get their piece of the smart city pie before the market is saturated.  As intersections and road infrastructure bisect every inch of a city, it is a logical target for them to focus their investment and technology.

In Toronto we got an early taste of this when Google tried to invest billions of dollars into developing a smart city pilot area near the downtown core.  While privacy and other concerns derailed the project it certainly put a spotlight on the industry, and the massive growth potential it holds. 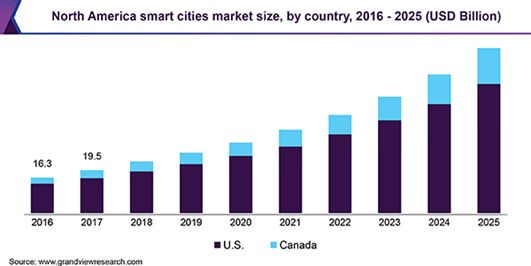 The exciting part about all this new interest in the industry is the cutting edge technology and investment that is now being introduced to the market.  As the head of an ITS (Intelligent Transportation Systems) company in the private sector, I get a unique view into the latest and greatest products that are coming to market.  All I can say is “wow”, there are some incredibly innovative companies entering this marketplace and it is very exciting to be a part of it.

Miovision Technologies is one of these innovative companies, which is based in Waterloo, Canada.  They provide a good example of big tech’s interest in the traffic industry.  In 2020 Telus Ventures invested over $70 million in the company, representing one of the largest investments they’ve ever made in a firm.  Telus is new to smart cities, especially traffic, but this investment clearly demonstrates the potential they think it holds.  Miovision raised over $120 million last year during that round of financing and we’re now seeing the benefits through a wide range of new product feature developments.  Many of them I can’t speak about directly just yet, but I can say they are going to be disruptive and very innovative.

One of the new features that I can talk about was just released last month and it’s called Intersection Health.  Miovision is known for bringing AI and software automation to computer vision systems, and now they are introducing that same kind of automation to the analysis of traffic signal performance data.

If you’re not familiar with Automated Traffic Signal Performance Measures (ATSPMs) then you really need to take a look at the amazing work Purdue university and UDOT have been doing over the last 10 years to develop and introduce these Signal Performance Measures to the traffic industry (FHWA provides a detailed intro: https://ops.fhwa.dot.gov/publications/fhwahop20002/ch4.htm  and Purdue has detailed reports: https://docs.lib.purdue.edu/atspmw/).  You can even see live data from UDOT intersections across the state which are interesting to look through: https://udottraffic.utah.gov/ATSPM

Miovision, with their TrafficLink platform, has been a great innovator in regards to ATSPMs as well.  They have integrated many of the Purdue metrics as well as developed a number of custom performance measures themselves which provide more detailed and related analysis.  However, what we constantly find is that even with an easy-to-use platform, traffic agencies still aren’t familiar enough with this new way of analysis to use these tools properly.  The industry is still stuck on the old way of doing things: wait for a complaint and then go digging.  What Miovision is trying to do is to flip this process so agencies go digging for problems before they manifest into complaints.

This tool identifies these issues and provides an interface to quickly review the data which is driving the analysis.  At a glance you can see what movement is impacted, what time of day it occurs, and what opportunities there are to resolve it.  Below is a screenshot showing a green split issue on a left hand turn movement and how it would appear to a user. 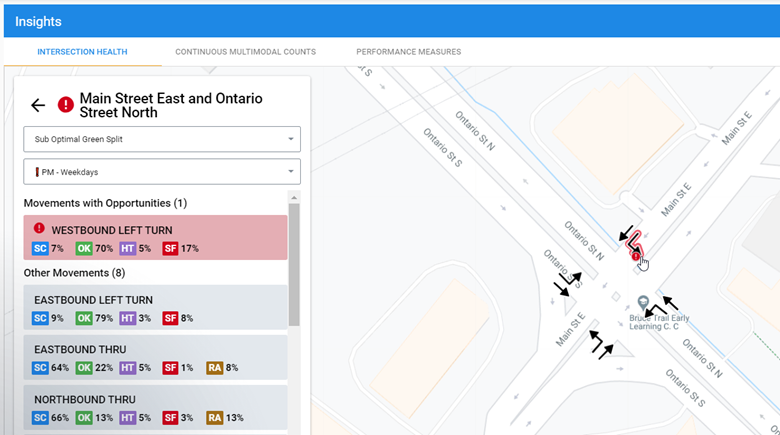 On this screen you can see the excessive split failures on this movement as well as the spare capacity available on opposing movements.  If the timings are tweaked, this report can be run again and the results compared.  Allowing for a gradual and iterative approach to tweaking signal timings.

Many companies tout adaptive signal timing as a silver bullet for all their signal performance issues, but from what I’m told by customers and members of the industry is that this is often overkill and not productive.  Traffic is typically very patterned and with tools like Intersection Health and ATSPMs, signal performance can be analyzed and tweaked on an as needed basis and very much proactively.

This entry was posted on 17 February 2021 under Uncategorized