Bosch On-board Analytics – Versatile ITS Applications for a Savvy User

Bosch is a massive player in the video analytics space with a huge team dedicated to vehicle mounted sensors for Automated Vehicles (AVs).  However, while Bosch is a large distributor of CCTV cameras, the supported analytics in these cameras has not been nearly as advanced as what was developed in their automotive divisions. Recently, over the last few years this has been changing, and we’ve seen a huge improvement within the on-board analytics of their CCTV cameras. For those in ITS this should be exciting as it’s opening up a number of new application possibilities, especially when something custom or niche is required.

The strength of Bosch’s analytics is its versatility, however; this can also be a hinderance as many cities don’t have technical staff with the product knowledge or experience to configure them.  Video analytics in the camera industry were originally designed and introduced for security applications and then eventually introduced for retail environments. Features like people counting within stores and heat maps of how people move through businesses became popular.  As these analytics have developed, the growing demand in the traffic industry has encouraged the development of traffic focused features. These same core analytic concepts are now being applied to traffic, with a little tweaking required of course.

The analytics available in the cameras are quite extensive, from traditional ones like crossline, object in box, and object idle to more traffic focused offerings like object classification, queue length detection, occupancy, and object counting.  Each feature allows for detailed object filtering rules to tune the analytics and avoid false calls.

Akin to the people counting performed in stores, this application can now be used on road. In fact, Bosch has now introduced the ability to classify not only people, but also cyclists, cars, and trucks. The heatmaps are not fully released for traffic but they are coming soon. There are several interesting applications of heatmaps; one important one will help us answer the question: How do pedestrians move through a crosswalk or through a PXO? How often does Jaywalking occur on this stretch of roadway?

Below is an example of Bosch’s classification and counting analytics in action.

Object classification is an impressive feature for an edge-analytics camera but there are a number of even more clever tools that Bosch has developed. They now have launched built-in machine learning and “object training” capabilities where a user can train the camera to recognize custom objects based on size, shape, colour, speed, and other characteristics.  With this tool you can teach the camera what a TTC bus looks like or a taxi, or a Fedex delivery van and then be able to detect when they are parked on your curb, measure how long they’re there for, or just count them as they go by.

“Curb-side management” has been a buzz word in the industry for the past few years but what I’ve found through my experience is that it’s a difficult problem to address.  However, I’ve reviewed a number of pilot projects where Bosch is performing a range of curbside management tasks and I’m impressed. They’re simultaneously:

All with a single camera. 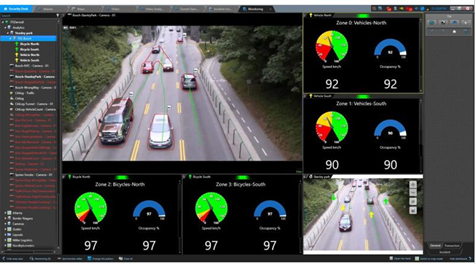 One of the key advantages of edge-based analytics is the ability to deploy cameras in remote locations where strong network connections are not available.  With on-board counting, you don’t need to send back high res video for processing.  This is all done within the camera and only small data count packets are sent back to the server. This means LTE deployments are more than possible and cameras can be placed in areas where they traditionally would not be considered.

How data is collected and organized is also very important. Bosch has a full device API to facilitate data integration with any third-party software. They come out of the box compatible with Genetec and a number of other video management platforms as well as have their own newly launched Bosch Cloud which allows you to store and view your analytics and count data.

Bosch’s new line of cameras focused on ITS applications are unlocking some intriguing new possibilities.  The biggest challenge I see? The configuration and tuning of them is a somewhat complicated task, requiring specialists and integrators. Stinson ITS has been working with Bosch cameras and analytics for almost three years now so we’d be happy to assist you with your various project applications. However, these config processes are being refined and simplified as we speak and I think once that’s complete, then we’ll start seeing wide-spread interest and adoption from traffic departments.

Check out our webinar “Bosch Analytics at the Edge – A Step Ahead” hosted by Michael McGuire, Stinson ITS’s Vice President.

In ITS, the application possibilities are very broad: including classifying Vehicle/Bike/Ped, object counting, wrong way detection, curb-side management, stop-bar detection, parking presence detection, etc. In this webinar Michael explains what these new camera analytics can do, as well as some examples of solutions we’ve deployed.

This entry was posted on 19 May 2021 under Uncategorized